With a need for middle and high for existing enrolled students in the school district, district always wants to build elementary to help builders sell their homes.

In June 2, 2015 City Council meeting due to lack of funding by DUSD, City reached a deal with Suncal the developer of Dublin crossings and did an  Dublin Crossing Plan Amendment  to include several land use changes that will financially benefit the Developer and allow them to transfer the school site to the City at no cost, including:

In Feb 7, 2017 City provided an update on the timeline from Initial MOU till date.Item 7.2 – 1309 Overview of Dublin Crossing School Site.  After deliberations the Council decides to form a 4 member committee  2 from the city (Don Biddle – Vice Mayor, Abe Gupta – CC Member) and 2 from School Board (Dan Cunnigham, Joe G) to discuss and negotiate about the Dublin Crossings school site.

Now, In May 2017, in a proposed agreement which is not public yet, City will provide the 9 acres out of 12 acres which were given by developer to the city earlier in 2015 to the school for free.
In turn, City will sell the 3 acres of the remaining 12 acres to the developer which adds revenue to the city.

With the lack of funding available to construct the school, the Dublin School Board’s only option to fund the new school would be to use Measure H bond money.

When Measure H was floated, the following priorities were assigned.

After Community outcry, this resolution was changed to this

Note the 2nd resolution was changed from money allocation to Partial Build out.

Again, after community outcry regarding the amount of money allocated to the Dublin Crossing school project, the resolution was changed for the 3rd time to fund a design only.  See below. 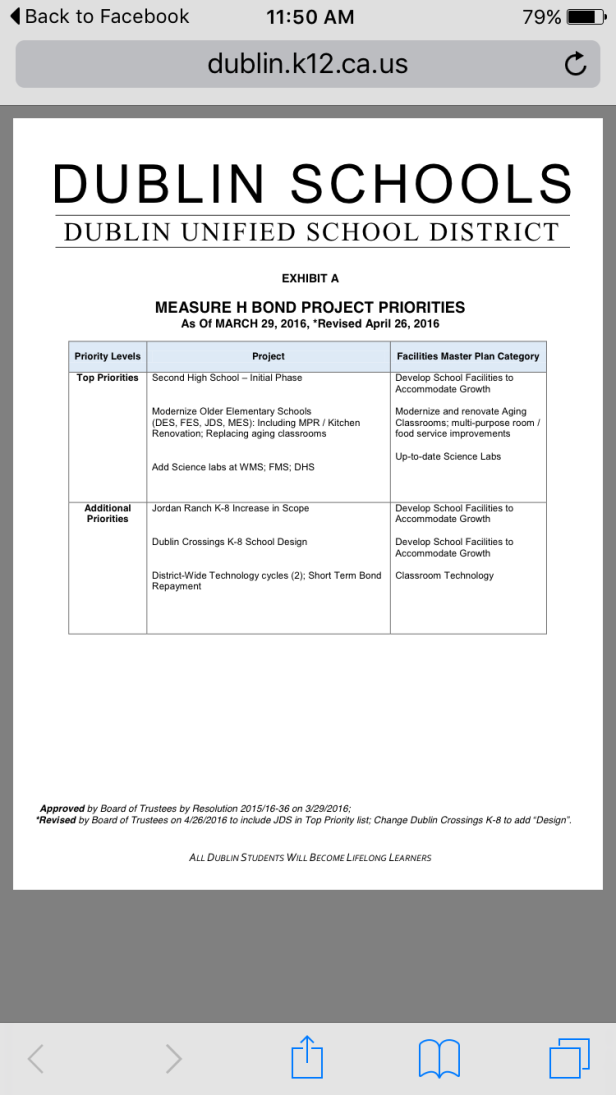 If the Dublin School Board is moving forward with a plan to use a significant portion of the Measure H bond money to build out the Dublin Crossing school, it is a deception and betrayal to the community about commitments and priorities.

The Dublin School Board has already obligated approximately $21.2 Million out of Measure H on 2nd level priority items, which are as follows:

That leaves the Dublin School Board with approximately $124M of unobligated/untouched Measure H funds that are accessible over the next few years.

If 109M was planned for Zeiss which was voted down on May 23rd and 70m can be redirected to use fo Dublin crossing schools and 32M for Engineering and Science building in existing DHS.. it gets a total of 211M. Can’t this money be used to build a 2nd high school at Promenade or Chen and build it earlier?

If elementary needs are there for incoming students from Dublin crossings, why can’t Neilsen be renovated and used for it ?

One thought on “History Repeats Itself All the time.”